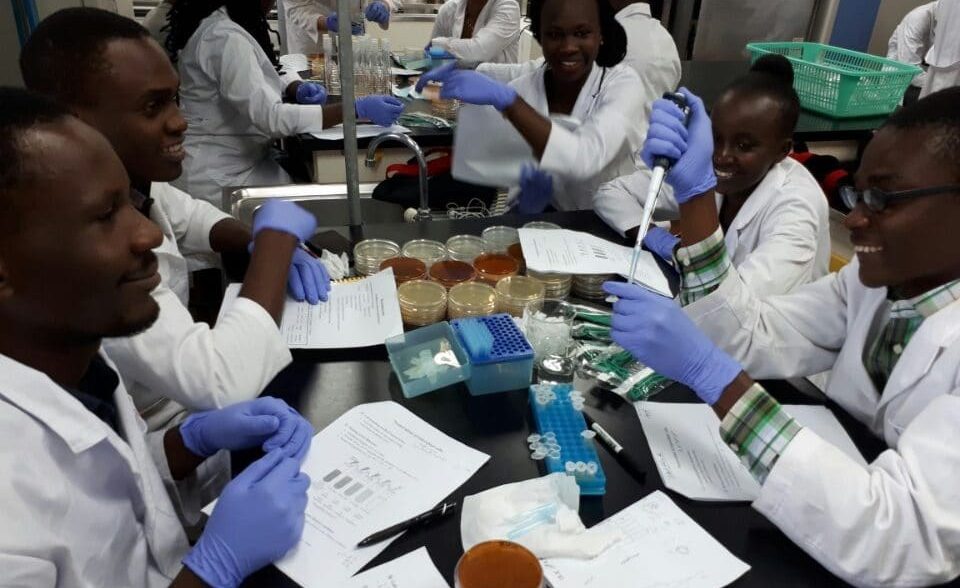 Justin Ahinon and Jo Havemann, both founders of AfricArXiv, talk in this article about the development of Open Science Services in Africa, initiatives, the current situation and chances in the future.

This article was originally published at elephantinthelab.org (doi:10.5281/zenodo.1492745)

Open Science is becoming increasingly popular globally and provides unprecedented opportunities for scientists in Africa, South East Asia, and Latin America. African scientists face several difficulties when attempting to get their work published in peer-reviewed journals  – there is a small number of publication platforms, a lack of knowledge and access difficulties related to existing journals (whose visibility on the web is not very good) (Piron et al., 2017). There are also obstacles related to the functioning of the journals themselves ( notably the duration of the revision process and the cost of publications)  and the result is that science and scholarly publishing are often perceived as a prerogative of the Northern countries. The methods and techniques (including the peer-review process) that are being developed for its dissemination are not necessarily adapted to the contexts of other regions of the world, including Africa. Indeed, many African-based peer-reviewed scholarly journals are unable to host their content online due to resource limitations and the digital divide (Agaba et al., 2004).

In this article, we provide an overview of the most important initiatives and actors in the Open Science movement in Africa. We further identify three major challenges for Open Science on the African continent and offer perspectives for African researchers to actively contribute to the global scientific community and share knowledge to meet the challenges we all face.

OPEN SCIENCE IN AFRICA, WHERE ARE WE NOW?

The Open Science movement first appeared in the early 1990s in the United States, then very quickly spread to other regions of the world (North and South) in the 2000s (Decung & Mukuku, 2016). But this movement has not been received in the same way in the different regions of the continent. While the Maghreb countries have embarked on policies to open up public data since 2010, the momentum has been less spontaneous among French-speaking sub-Saharan African countries (Olivier, 2015). As for the English-speaking countries, they very quickly became involved in the movement; this is reflected in theprominent position they occupy on the continent in the ranking of countries in terms of data openness.

According to a study by the African Journal Online published in September 2014, of 319 journals listed on the African continent, 197 had open access publication policies. This study also reveals that the vast majority of the journals and archives surveyed (289) had English as their main language of publication. Only 13 used French as their main language of publication.
In the last decade, the need to promote and make the content produced in Africa or on topics related to Africa on the Internet more visible, has increased. Several initiatives have emerged from this growing need, all of which aim to reverse the trend in terms of Africa’s visibility on the scientific web:

According to Nkolo (2016), three key challenges remain to be solved for Open Access – and consequently for full adoption of Open Science on the African continent. These are 1) Internet penetration, 2) political governance, and 3) the standardization of services and platforms.

Internet access is one of the most recurrent hindrances for scientific research in Africa and remains very low in some regions and  internet penetration remains low across the continent (Attanasio, Giorgi). According to Internet World Stats, in 2016 there were about 453 million active Internet users in Africa. This gives a penetration rate of about 35%. In the field of education, progress in terms of Internet access varies from one country to another. For example, according to a May 2017 Internet Society report on Internet use in education in Africa, in countries such as Botswana, Kenya, Morocco, Senegal and South Africa, efforts to improve connectivity have enabled key actors in the education system to have better access to the Internet.

GOVERNANCE OF OPEN SCIENCE IN AFRICA

The Open Science movement in Africa could only benefit from a better or greater involvement of educational and political decision-making bodies. According to figures from the Registry of Open Access Repository (ROAR), in 2018, the number of open access policies on the continent is evaluated at 31, the majority of which are from East African countries (17) and South Africa (9) (roarmap.eprints.org). In regions of the world where the Open Access movement has strong impact, such as India, Argentina and China, laws and policies are in place to promote Open Access and have played an important role (Hameau, 2015).

The establishment of standardized open directories or archives through digital libraries to increase the visibility of content produced by Africans, or on subjects related to the continent on the scientific web are needed. In addition, these will require coordination in the functioning of these different content distribution platforms. African scientists will gain a lot if the various initiatives to bring Open Access to the forefront collaborate.

Improving the quality of service and the Internet penetration rate on the continent will help to disseminate and share knowledge more effectively at the global level. National and pan-African policies for Open Access and collaboration between the various actors in Research and Economic Development will play a key role in the process of making science more visible within and outside Africa. This can be achieved strategically by creating an environment conducive to the implementation of Open Science practices on the one hand, and by making the above mentioned initiatives and services complementary, interoperable and thus more effective on the other hand.

Justin Sègbédji Ahinon is a web developer with a background in economic and financial statistics. He is strongly interested in open access issues in Africa as well as in the dissemination of knowledge and the means by which it is carried out on the continent. He is a fellow and recently a mentor of the Mozilla Open Leaders program where he worked on the place and importance of “informal” sciences in Africa. Justin is also the co-founder of AfricArxiv, an open access pre-publication directory for African scientists.

Jo Havemann is a trainer and consultant in Science Communication and Science Management with a PhD in Evolution & Developmental Biology. Her working experience covers NGOs, a science startup and international institutions including the UN Environment Programme. Since 2014, Jo offers courses and trainings with a focus on digital tools for Science through her label Access 2 Perspectives and aims at strengthening Research on the African continent through Open Science.